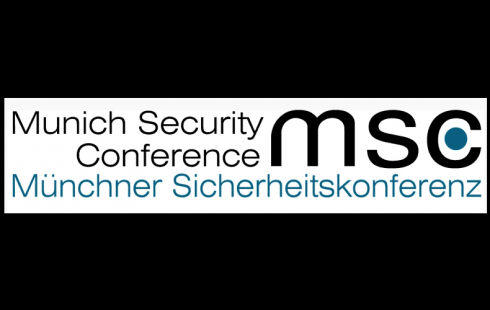 This year's Munich Security Conference (MSC) will be held from February 16 - 18th, 2018 at the "Hotel Bayerischer Hof" again.

On the agenda are, in particular, the future and ability of the EU to act and its relations with Russia and the United States.

Further points of discussion will be the threat to the liberal national order, the numerous conflicts in the Near and Middle East and the development of the political situation in the Sahel. Disarmament issues will also be a major topic, especially the situation over the North Korean nuclear program.

More than 600 conference participants are expected. Many heads of state have announced their arrival such as the Israeli Prime Minister Benjamin Netanjahu, the Prime Minister of the United Kingdom Theresa May, the Ukrainian President Petro Poroschenko and Rwanda's president Paul Kagame. Other already confirmed guests are UN Secretary General António Guterres, EU Commission President Jean-Claude Juncker, the High Representative of the EU for Foreign and Security Policy Federica Mogherini and NATO Secretary General Jens Stoltenberg.

Numerous protest rallies are expected to take place around the conference again. The main demonstration will be held on 17 February by the "Alliance against the NATO Security Conference". 4000 participants are expected for this, while 4000 members of the police force will be in action around the premises. Munich city center is therefore expected to be paralyzed for traffic between 1pm and 5pm. The area affected includes everything within the circle Karlsplatz (Stachus), Marienplatz, and Odeonsplatz. Also, the main shopping streets Neuhauser and Kaufinger Straße will be blocked by the formation of a protest chain.

Special security measures will be taken around the Hotel Bayerischer Hof on Promenadeplatz. This area may only be entered by persons with a "demonstrably legitimate interest". All others have to stay outside the 650 barriers during the duration of the MSC.