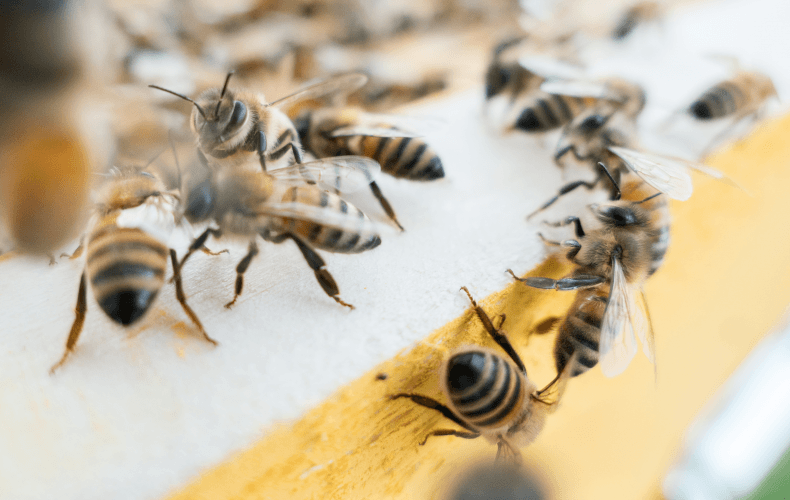 From today onwards, entitled voters can register in the town halls for the Volksbegehren "Biodiversity - Save the bees".

A Volksbegehren is comparable to a petition and as stated in the Bavarian constitution, citizens may initiate concrete projects at state level. However, there are some hurdles to overcome.

Firstly, it requires 25,000 signatures of voting citizens to support the petition. When and how these signatures are collected is not regulated. Subsequently the Ministry of the Interior must check whether the petition is also permissible - in case of doubt the Constitutional Court has to decide. If the petition is authorized, a two-week period is set in which at least ten percent of the entitled voters have to register in lists displayed in town halls and other offices of authorities. In Bavaria, ten percent is currently almost one million citizens.
Once this hurdle has been taken, the state parliament has to deal with the citizens' concerns within three months. Then there are two options: Either the state parliament accepts the petition as it is or within another three months a referendum is to be initiated.

In a referendum all voters may vote yes or no on the proposal and policy would have no possibility to change that decision. A simple majority is sufficient.

"Save the bees": pros and cons to the petition, from a farming perspective

The initiative has many supporters, including organic farming associations and the National Association of the Working Community of Agricultural Agriculture. But there are also many critics. Among the most prominent opponents is the Bavarian Farmers Association, whose activities difrectly impact the environment for bees.

Here are the three main issues:

The petition calls for 30 percent organic farming in Bavaria by 2030. Currently, about ten percent of farmers manage their land ecologically.

Proponents say: The demand for organic products exceeds the Bavarian capabilities. Additional organic goods are imported from abroad. Bavarian farmers could gain here as organic farmers are getting more money for their products, which also means they have to produce less. Their fields and farmland are thus exonerated and animals can use them again as a habitat. In addition, organic farming does not use pesticides, which can counteract the extinction of species.

The critics say: The organic market is saturated. Especially the Bavarian organic milk market is currently not receptive. Almost all dairies reject interested organic milk producers as their needs are already covered.

2. The Farmers are made responsible

Most of the demands of the petition refer to the farmers: they are to mow their lands later in the year, create more flowering meadows, make their farmland available for a biotope network, leave wide margins on all streams and ditches and reduce pesticides.

Proponents say: 44 percent of the total area of Bavaria is used for agriculture. It does not work without the farmers. More flowering meadows and less interference with their natural habitats are important for butterflies, bees and other insects. Hedges, paths and ponds have disappeared, fields have grown larger and larger. Monocultures are harming the already endangered bees and other species.

The critics say: those who vote for the referendum want to save the bees, but ignore their responsibility and blame farmers for everything. The farmers' association wants to avoid more restrictions for farmers. Not only does intensive agriculture threaten the species, surface sealing by new buildings or commercial areas, the increasing light pollution and increasing leisure activities in sensitive areas have the same effect. Another problem are most home gardens: stone deserts and mowing robots/lawnmowers create neither a home nor food for animals.

So far, farmers have been receiving money for their voluntary service to the environment. The new law would make these environmental services compulsory.

Proponents say: What farmers have done for nature conservation is simply not enough. Species extinction continues, despite the voluntary efforts of farmers. Around EUR 275 million a year are invested into a landscape program. Just because nature conservation should be determined by law in the future, does not mean that funding has to be stopped. The supporters say: even the Animal Protection Act does not prevent the support of animal-friendly forms of animal keeping. The compliance with legal regulations does not make funding impossible, but is even a prerequisite to receive subsidies.

This is what the critics say: The farmers' association fears that the new nature conservation law will undermine previous funding opportunities. What is legally compulsory, the farmers can get no more money for. The Bavarian Ministry of Agriculture agrees on that. A spokesman says: "Current funding could be eliminated or reduced." But many farmers depend on these subsidies. About every second Bavarian farmer already participates in environmental programs or contract nature conservation. The farmers' association is itself has created an initiative for more flowering meadows. According to the association, a flowering strip the length of Hamburg to Gibraltar has thus been created last year.