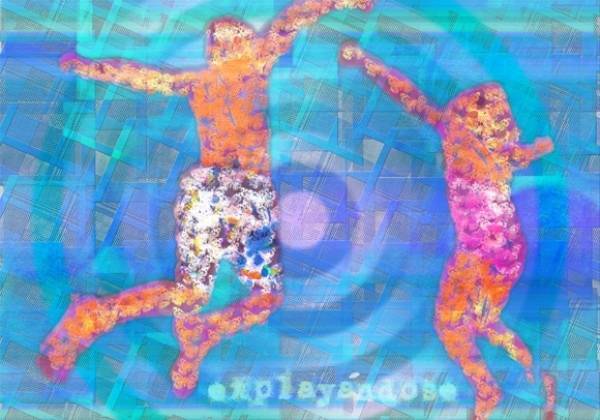 I will stop thinking for a while. I can´t, the music is a disaster and I came with Nataly. Who would think trying to get out of a breakdown going round bars with his sister? Although I´ve given up smoking, I keep on carrying my lighter everywhere. I light it and blow it out once and again. 'Let´s go,' I say and Nataly, behaving  as my therapeutical companion, jumps up from her seat as a spring. 'Where?,'  'Anywhere... anywhere you like...'  'Are you hungry?,' 'No, but I´ll go with you'  'What about some sausages?,' 'All right'.

At night, the river hides very well its brown color and it could perfectly be Danube blue, but who cares about that just now? If only I could be like Nataly... She´s a bit plump, but she doesn´t care at all and she invites you to have some sausages on the coast. Just a little of that attitude woul have made my life easier. The same attitude she already had when she was a little girl, as when she made me jump into a deep river with her, even though none of us could swim.

They say that moving into a new house, losing a job or getting divorced are the three biggest causes of stress. When you go through the three of them at the same time, it´s difficult to come off well. I´m in that situation of childish fragility that makes me want to see in casual facts, metaphysical signs to solve my life: black cats that pass by me without looking at me, ambulances with brake lights that fail, funeral cars or cars carrying brides or fifteen -aged girls. I want to give power to any thing that pass by me, either for my recovery or to hasten my fall.

I sit down with my back to the river and watch the avenue. Every time the traffic lights change to red, I look at the cars believing that they are telling me something. But the only thing that happens is that Nataly goes to the barbecue for another sausage. Sings have always dodged me, otherwise, I would have realized that I was about to be dismissed and because of that my wife would leave me and I would feel obliged to leave the house that hasn´t been paid yet...

I turn around looking for Nataly as I feel that she´s taken a long time and I see her laughing with the barbecue man because the fire has gone through the sausages and hamburgers.  'They will become burnt,' I think, while the growing flame begins to burn the cable of the makeshift lamp that lit the barbecue. We move back by conditioned reflex and in a few seconds the whole kiosk catches fire. We sit down at the edge of the balustrade that looks on to the river, and watch the spontaneous scene. The firemen and the police arrive. I think that the police refer to the unknown NN as Nataly Nataly and I laugh for the first time in many months, thinking about  my sister´s doubling. I laugh for the first time in a long time. My Nataly elbows me and tells me in a low voice, while  watching the flames that refuse to give up: 'You were who wanted a signal, weren´t you?'