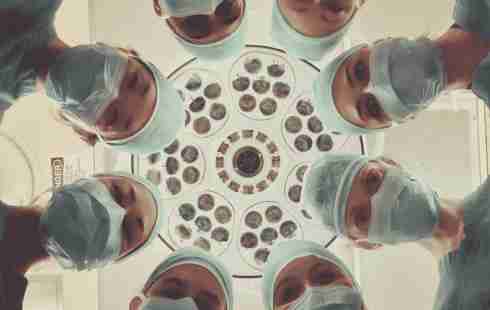 The French healthcare system is reaching its limits, for the third time since the pandemic broke out. In the capital region, where the British virus mutant is particularly rampant, hospital doctors have now issued a sensational call for help: "In our emergency, we are forced to choose between patients in order to save as many lives as possible," it says.

They say the triage affects all patients in the 39 public hospitals in Paris and the surrounding area, "whether with Covid-19 or other serious illness." The 41 signatories of the appeal stress that they do not want to betray the Hippocrates oath and therefore alert the public.

"Patient selection has already begun, as important surgical and other medical procedures have already been canceled," they write. Soon, even vital emergency surgeries could not be guaranteed due to lack of staff and intensive care beds.

According to the latest statistics from the French health authority, the occupancy rate of intensive care beds is 127.7 percent in the greater Paris area, with 1465 Covid 19 patients being treated in intensive care units, compared to a total of 4872 patients in France as a whole. The number of infections is rising continuously, with 37,014 new infections reported in the past 24 hours.

Ethics council to set rules for triage
The public hospital association AP-HP in Paris wants to appeal to the National Ethics Council to obtain universally applicable rules for triage. At the height of the first wave, some hospitals in Alsace, for example in Mulhouse, were already so overloaded that doctors had to make selections. Quite a few seriously ill Covid 19 patients in nursing homes for the elderly were not taken to the hospitals. The decision had been approved by the Ethics Council.

On Jan. 24, Jean-Francois Delfraissy, president of the French Science Council, explicitly warned against the scenario of overburdened intensive care units. At the time, he advocated tougher restrictions. He said a nighttime curfew would not be enough to prevent the spread of viral mutants. "We have seen in England and in Ireland that minor measures are not enough. London hospitals were in a very difficult situation," Delfraissy warned.

Macron overrules advisers
But President Emmanuel Macron decided on Jan. 29 to defy the advice of the advisory panel and forgo new restrictions. He was said to have "emancipated" himself from the scientists. Macron spoke of a "third way" France was taking in the pandemic, between laissez-faire and strict lockdown. But now the infection has intensified as epidemiologists' calculations had predicted for mid to late March.

The situation is particularly critical at many schools, especially in the capital region. The incidence rate in the ten to nineteen age group is 835 in the Paris metropolitan area, but the government group points to the social consequences of closing schools. "I am proud that we are keeping schools open. That's the strongest way to fight inequality. Who can measure the damage to children who haven't seen a classroom for months?" said La République en marche deputy Aurore Bergé on Monday.

Education Minister Jean-Michel Blanquer shared a video clip set to the music of Pink Floyd's "Another brick in the wall" with the lyrics, "We hate online education." ("We hate online education"). He has repeatedly stressed that the closure of schools can only be the very last measure. Ile-de-France Regional Council President Valérie Pécresse has proposed bringing forward the spring vacations for Greater Paris by two weeks. But so far, President Macron has not taken up the proposal. Since Monday, school classes have had to close as soon as a Covid 19 case is reported; previously, classes had only been closed when there were three cases.

President Macron has announced that he will convene a new Corona Security Council at the Elysée Palace on Wednesday. "The battle of the next few days is simple," Macron told the Journal du Dimanche. "We will look at the effectiveness of the containment measures and will decide on new ones, should that be necessary," he said. He stressed he was acting with "pragmatism." "There are even worse things than not admitting your mistakes, which consists in not learning anything from your mistakes," the president of the regional council of northern France, Xavier Bertrand, reproached him.