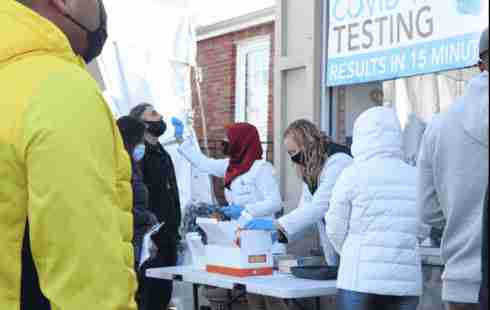 Covid 19 rapid tests are supposed to be a pillar of infection protection in Germany. However, according to a recent analysis by the Cochrane International research network, only a few of the available rapid tests reliably detect infections.

According to the resolutions of the federal and state governments, daily tests are to become mandatory where spacing or mask-wearing is difficult. Testing is to be made compulsory in the Infection Protection Act before air travel to Germany, and two tests a week are to be made possible for schoolchildren, teachers and daycare workers. Positive test results indicate who should immediately limit their contacts with fellow human beings in order not to infect them.

"If an employee of a retirement home tests himself before he goes to work, he will prevent many secondary infections in the event of an undetected infection," Michael Meyer-Hermann of the Helmholtz Center for Infection Research in Braunschweig told the Tagesspiegel. "The point of the tests planned here is to break infection chains," the systems immunologist said.

Positive test results should also help people receive medical treatment and quickly follow up on their contacts. But while the tests can detect symptomatic disease fairly reliably, many do not provide reliable results before the onset of the first signs of the disease, Cochrane International reported.

Rapid tests provide a result within 30 minutes to two hours. Swabs from the nose or throat are used as sample material. Antigen tests work if they contain viral proteins, for example fragments of the envelope. Rapid molecular tests detect the genetic material of the pathogen.

The research network comes to a negative conclusion about the accuracy of the methods. While there is wide variation, "very few" rapid tests meet the requirements of the World Health Organization (WHO), the statement said.

The researchers evaluated 64 studies that compared the results of rapid tests with those of PCR tests. PCR tests also detect the genetic makeup of the virus. The laboratory method is considered the gold standard, but results are usually only available after one or more days. Only three of the studies, mostly conducted in Europe or the U.S., evaluated test results in people without symptoms of covid-19.

Of infected persons with symptoms, the antigen tests detected an average of 72 percent. When tests were performed in the first week with symptoms, the detection rate was 78 percent. Results for tests from different manufacturers ranged from 34 percent to 88 percent. However, the result also depended on how well the instructions for the procedure were followed. For infected individuals without symptoms, the antigen tests provided the correct positive result on average only 58 percent of the time. In contrast, according to the quality criteria specified by the WHO, tests must detect at least 80 percent of infected persons.

Negative test results, on the other hand, applied with great accuracy: in 99.5 percent of those tested with Covid-19-like symptoms and in 98.9 of those tested without symptoms. Here, the WHO criterion of at least 97 percent correct negative results is usually achieved.

For infection protection, however, it would be more important to reliably detect infected people. "Ideally, two people who want to meet would test each other beforehand in a standard and uncomplicated way and then sit together in a relaxed manner, without any guilty conscience or worry about infecting each other or infecting the other person," says Meyer-Hermann. But there is no certainty of a correctly negative result, especially as long as there are no symptoms.

"With all antigen tests, some infected people will slip through," says Jac Dinnes, one of the Cochrane authors from the University of Birmingham. Therefore, he says, it is important to communicate with a negative test result that infections have not been ruled out.

The evaluation also questions the extent to which standard tests in schools and nursing homes, for example, can help protect against infection. "We haven't found any data or studies on this that assess the accuracy of repeated testing in people where it is unknown to what extent they have been exposed to the virus," says co-author Jon Deeks of the University of Birmingham. "This testing strategy is being introduced without the basis of real application data."

However, the study found that the accuracy of the results is also influenced by who performs the test. Further research will investigate the relationship between experience with the tests and their sensitivity in more detail.