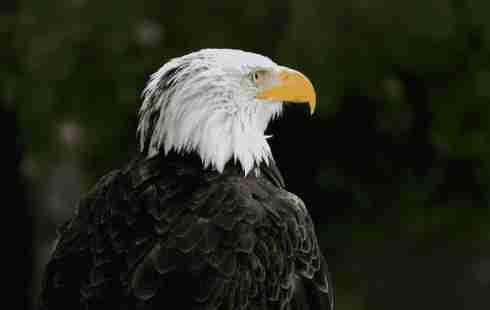 With criminalistic flair, researchers have solved the mystery surrounding the mysterious mass death of bald eagles in the southeastern United States. The cause is a toxin formed by blue-green algae, as a team led by Timo Niedermeyer of the University of Halle-Wittenberg and Susan Wilde of the University of Georgia writes in the journal Science.

Bald eagles, as well as other birds in the region, have been suffering from a disease of the nerves since the 1990s. The animals lose control of their bodies and eventually die. Bald eagles are the heraldic animal of the United States. They are among the largest birds of prey in North America, with a wingspan of over six feet. The head, neck and tail feathers are white and stand out against the dark brown body feathers.

In her research, Susan Wilde first discovered that a substance from a previously unknown blue-green algae that lives on ground nettles (Hydrilla verticillata) in freshwater lakes was making various birds and other animals sick. They found that the harmful substance made its way into herbivorous fish, waterfowl or turtles, which were eventually eaten by bald eagles. What exactly about the blue-green algae, also known as cyanobacteria, led to the poisoning was unclear.

"It wasn't just the birds that went crazy".
This "eagle killer toxin" was finally identified by experts in cyanobacteria at the University of Halle-Wittenberg. When Timo Niedermeyer learned that Susan Wilde suspected cyanobacteria on the leaves of ground nettles were the cause of the neurological disease in waterfowl, he had samples sent from Georgia. He scraped the cyanobacteria off the plants and grew them in the lab. Back in Georgia, they tested to see if the increased bacteria were actually poisoning the birds.

But the cyanobacteria sent to Georgia from the lab in Germany did not make the birds sick. "It wasn't just the birds that were going crazy, it was us. We wanted to find out," Niedermeyer says. The bacteria grown were not toxic. So the researcher had new samples sent to him. This time, his team also analyzed the surface of the leaves. This revealed a peculiar bromine compound on the leaves. It turned out that the bacteria need bromine to produce their bromine-containing toxin. Only after bromine-containing salts were added to the laboratory cultures could the bacteria make birds sick.

Not only was the killer caught, but his weapon was also discovered, Wilde said. Still, it remains unclear why the bacteria produce the toxin in some lakes - but not in others. The researchers have one suspicion: in some lakes, a bromine-containing herbicide is used to destroy the invasive ground nettles. However, bromine compounds also occur in nature.

Image by Manfred Richter from Pixabay