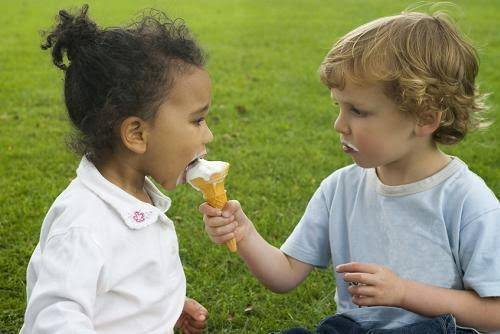 A recent study on the influence of religion on altruistic behavior among children was conducted by Dr. Jean Decety, at the Department of Psychology from University of Chicago along with an international team of scientists.

To test the correlation between religion and acts of kindness among kids, the scientists selected 1,170 children aged from five to twelve.

The children were divided into three categories- Not religious, Christian and Islam.

Although the original sample included kids who were Hindus, Jews, Buddhists etc. yet they did not add up to a large enough sample size to be included in their analysis.

In all three categories, the study first obtained a sense of children's altruistic tendencies from the parent's perspective.

As expected, parents from religious households rated their children to be more generous and equipped with a stronger sensitivity to other's plight than the ones from a non-religious background.

However, results from the new study disagree!

The scientists played a game known as 'Dictator Game' with the children to conduct their experiments.

So what did this game entail?

Children were shown 30 stickers and were asked to pick ten of their favorites, for them to keep. They were then asked to share their stickers with an anonymous child that they hadn't seen or met in their school.

Here's the catch- Not only did the anonymous child belong to the same school but also was part of the same ethnic group.

This was done to eliminate any bias that would arise regarding the child's behavior towards an 'out-group' compared to members of their own group.

The average number of stickers shared by the children was used as a measure of altruism in this study.

The results were counterintuitive and thought provoking at the same time. Children from non-religious backgrounds demonstrated more kindness than the ones from religious households!

Consistent with past studies, the age of children in these experiments served as another predictor for sharing.

The study revealed that the association between religion and generosity was strongest among older children (aged 8-12 years), indicating that those kids with longer exposure to spirituality and religion were less altruistic than their non-religious counterparts.

The study played another major role in examining how religion shapes the relationship between punitive tendencies of children when faced with mundane interpersonal harm in their schools.

Now, what does all this imply?

Clearly, this study defies age-old beliefs about how a religious upbringing can endorse, espouse and enhance our moral and humanitarian tendencies.

Such studies are very critical, particularly because they throw light on an imminent problem our society is encountering and is likely to come across more in the near future.

As a result of the ongoing refugee crisis, when migrant children join European schools, such studies could serve as predictors for what to expect in a classroom atmosphere and prepare the governments and educational institutions to tackle these tricky issues.

Although these experiments were only carried out among a few nations and we need larger data sets from future studies; nevertheless this is a thought provoking study and makes one question the venerable assumption that morality and religion cannot be mutually exclusive!