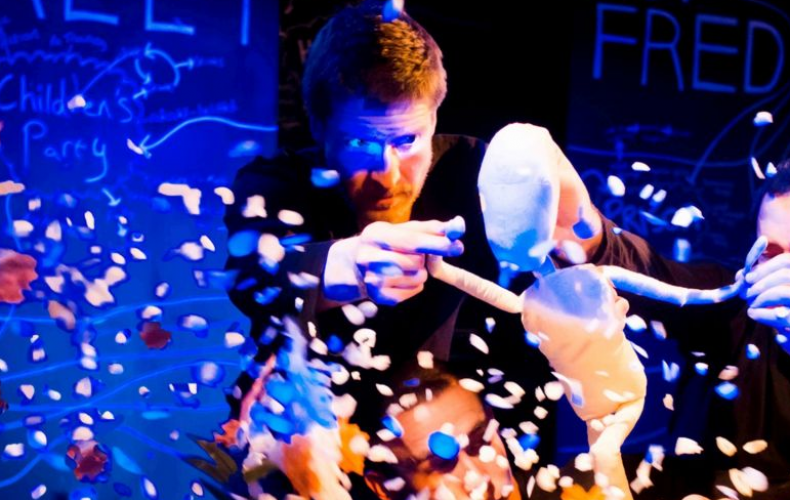 Welcome to the show and meet Fred who is a simple but curious and very lively canvas puppet who aims to lead a normal life.

"Meet Fred" was the opener at Munich Stadtmuseum of the "mit:gefühl" International Puppet Theater Festival in Munich taking place from 17 to 28 October 2018 with 31 different productions from ten countries. The festival´s title "mit:gefühl" translates as compassion and stresses empathy - empathy for a lifeless object like a puppet. Or for people with learning disorders for which Fred in this play stands for. It also stands for compassion at eye level. Compassion is an essential element for puppet theaters; without it, the puppets can´t be animated. Our intellect knows that we watch a lifeless object but our feelings want to take it for real. This is a crucial element of puppet theaters and the festival´s theme. It aims to address all our senses.

So, Fred wants to be like everyone else, a regular guy. The director who plays his alter ego wants to know why. Does Fred have a choice? He tries to live a normal life and director Ben Pettitt-Wade ticks off the brain-storming clouds on the blackboard in the background of the stage: Job Centre, Date Night, and Suicide. Every station he goes through turns into a catastrophe, and we as the audience suffer with Fred who we can refer to as a real person with his three puppeteers who make him come alive. All the jobs he can choose from are not really suitable for a puppet and the only one that is manageable for him, Fred doesn´t want to take as it is a full cliché -- children´s entertainer. He rather would like to be an astronaut.

The show was simultaneously translated by two sign language interpreters and is full of black humor and heart-breaking realism. Sentences like "We put you in a box to keep you safe", "Whatever I choose, I have no choice in it", and "You're just a useless piece of cloth, just a prototype", stick.

The Welsh theater company Hijinx Theatre in Cardiff that staged this play works with actors who have learning disabilities. They call it inclusive theater because "it makes much of the skills and raw talent of people who often get overlooked in today's world and gives them a platform to make and perform stunning theater alongside actors who don't have disabilities." For one of the actors with a learning disability, doing the puppet´s legs was crucial. In the end he wasn't capable of doing it good enough as even for professional Bunraku puppeteers (Japanese 3 man puppet theater) it takes ten years to train this skill. This story is also incorporated in "Meet Fred" and thus it becomes a show of people´s dreams. The Hijinx Theatre won the award Best Ensemble at the Wales Theatre Awards 2017.

International Puppet Theater Festival is in Munich from 17th to 28th October 2018.

Drawn to the fine arts Nina Bayne is reporting about concerts, events and exhibitions taking place in Munich. More on www.ninabayne.com