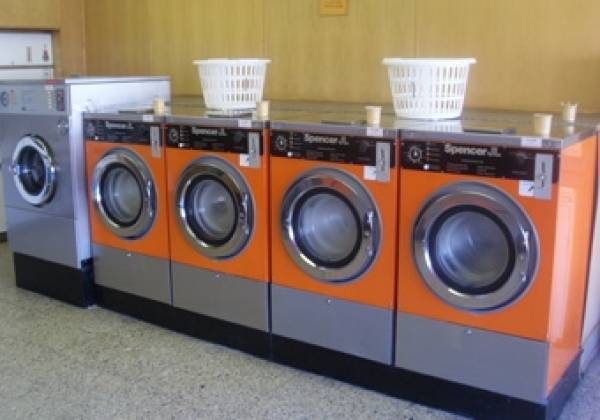 I thought I had quite a good grasp of German. Until I moved to Munich, that is. I had spent months diligently copying verbs tables, and listening to German language podcasts. I knew how to order a coffee in 'Hoch-Deutsch'; how to say that I'd enjoyed an action film and how to book a doctors appointment in rather a rigid, robotic manner (with no banter, naturally.)

But I was woefully unprepared for the logistical nightmare of washing my clothes in a Bavarian laundrette (a 'Waschsalon' for those of you still resolutely sticking to our mother tongue.) Months of German learning, I was to discover, counted for precisely nothing in one of these God-forsaken places.

Now, I have never visited a laundrette in England before, let alone one in deepest, darkest Bavaria (in Schwabing to be precise), and my only idea of washing-machine etiquette came from cheesy scenes in American movies where the protagonists struck up shy conversation to the rumble of rotating clothes.

I had no idea of the ordeal that awaited me in simply transforming smelly clothes into nice-smelling ones. But I had little choice, having yet to find permanent accommodation in the city.

Well, the moment I entered the stuffy, cluttered room, I regretted it. The atmosphere was heavy with negative energy. I seemed to have interrupted an argument between two local women, one of whom (or perhaps both) was the proprietress. They looked rather like twins - short, extremely rotund and both with extraordinarily cold, squinting eyes like mad Mastiffs.

"Er, Guten Morgen!" I spluttered as I closed the door behind me and waved my large bag of loot pathetically. "Zu waschen, ja, bitte?" My German always deserts me in moments like this, and I am reduced to little more than a blabbering buffoon.

They instantly fell silent, regarding me contemptuously like a dollop of half-rotted road kill, noses visibly contracting in utter and unconcealed disgust. Perhaps this look alone might have sent me packing in the UK, but it had taken me long enough to find this side-street Waschsalon, let alone another. And my three carrier bags were heavy - two had already broken.

The burlier woman behind the counter pointed sternly at a machine in the corner. I obediently followed her plump finger to the tatty appliance, the only one not running at that moment. It was nevertheless full with a strangers damp clothes.

Unsure where I was supposed to deposit them, I pondered going back to ask, but the argument had resumed - apparently undiminished for the presence of a third party.

Insults were being traded like bouts of machine gun fire in harsh, rasping language I could make neither head nor tail of (nor any other word for that matter.) Was this really the German tongue?

I was feeling distinctly uncomfortable, crouched by my little machine. I decided anything would be preferable to interrupting two women, both of whom could have beaten the pulp out of me in five seconds. So I artfully extracted the stranger's clothes, placing them neatly on the floor, and inserted my own.

But now had come the part I'd dreaded the most: getting the bloody thing to start washing them. I tried every combination of buttons imaginable to no avail. I even bashed the side of the machine which caused a momentary lull in the loud voices, making my blood freeze for a few seconds.

It was surely the most overly-complicated contraption ever designed for the mundane task of washing a chap's clothes - and I felt one specially designed to thwart a man with no common sense (i.e., me.)

I began to sweat, realising with cold terror that I would have to return to the counter and ask the ogrish pair for assistance.

I sidled back over as casually as possible, but it was a further minute before they stopped their squabble to acknowledge me standing beside them.

Their expressions spoke a thousand words, none of them let's say...complimentary.

With an undisguised tut and a sigh, the proprietress waddled over to my humble corner. She couldn't have made it any clearer from her manner that my custom in her little emporium was not only unwanted, but actively detested.

Which of course lies in sharp contrast to normal customer service in Munich which as we all know, is impeccable in its ready friendliness, especially in electronics stores.

I shifted on the spot uncomfortably as she heaped the stranger's clothes into a nearby basket while muttering some local profanity under her breath.

She then barked at me a long and obviously well-practised monologue in thick and unbroken Bavarian, apparently pertaining to the operation of the machine before me. This was accompanied by a series of violent gestures to a variety of different buttons in seemingly random order. The only word I could discern from this five minute onslaught was 'und'.

When she had finally finished, she turned her pale, petulant eyes to me. They bore deeply into my own, seeming to say: 'Now if you ask me again, your severed head will be the next thing I load into this machine!"

She didn't wait for me to finish but marched brashly back to her companion and the war of words resumed with renewed ferocity.

I looked in despair at the wretched machine before me, and felt for the first time in my life absolute hatred towards an inanimate object. I jabbed at the buttons again, trying to recall the order of the woman's fat, impatient finger. But it was of no use; the thing remained stubbornly inactive, while beside it an obedient row of identical machines happily tossed their loads round and round and round.

I would have taken the obvious plunge of asking another customer at this point, but none had entered the laundrette the whole time I was there, dissuaded, no doubt, by the carnage at the counter.

The day was trickling by. With a long sigh and an abominable curse I finally yanked my ball of dry, crinkled clothes from the machine and crammed them back into the broken carrier bags I had brought them in.

Then I began the march of shame towards the door. I felt two sets of beady eyes following me; I was a thoroughly marked man until I had closed the shop door behind me. Instantly the air felt two tonnes lighter. A nearby pigeon was pecking at a cigarette butt. At that moment I would have traded places with the bird.

Later that evening, I resolved to go to a friend's flat on the other side of town to use his washing machine (which required just two simple clicks) and vowed that the very first thing I would check when viewing a flat from now on was that it had its own washing machine.

Chris Darby is a journalist for The Munich Times.