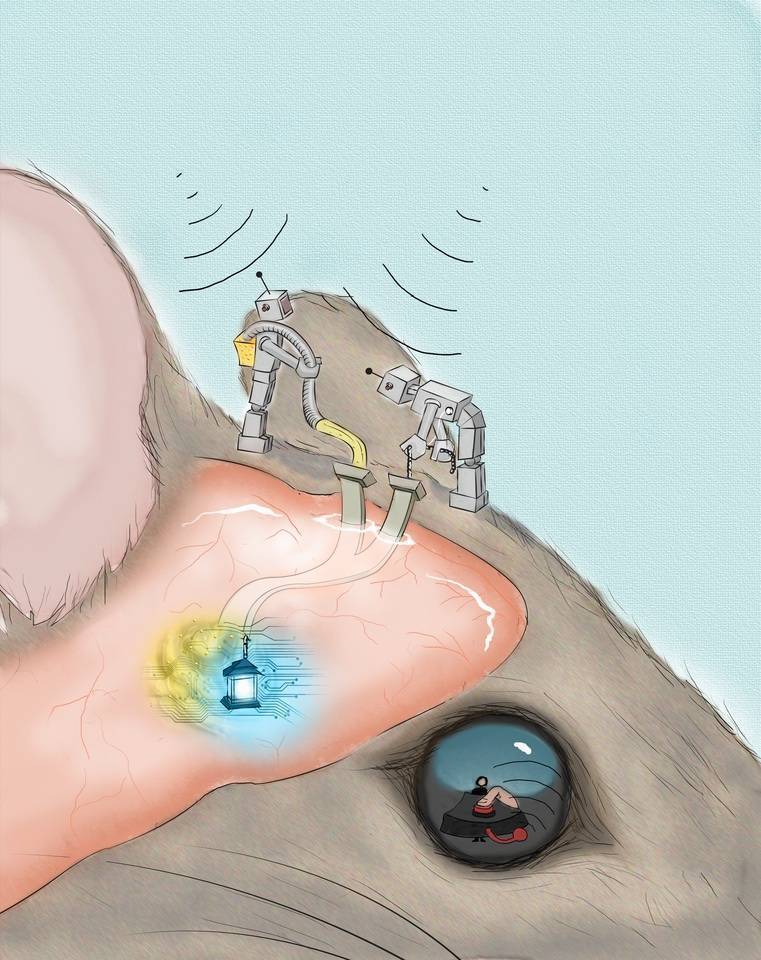 Researchers from the Washington University School of Medicine, Missouri, and University of Illinois at Urbana-Champaign have targeted specific regions of the brain with a wireless probe like no other.

The brain probe they developed combines the ability to deliver drugs with deep brain stimulation (DBS) via a micro-scale light-emitting probe.

DBS is a method of stimulating brain cells with either an electrical or light pulse. What makes this so remarkable is that it is all done through wireless technology and on a much smaller scale than ever before.

"We made an innovative effort by combining neuroscience with engineering and created what we refer to as a Wireless Optofluidic Neural Device", said senior author of the paper, Dr. Michael R. Bruchas, an associate professor at Washington University School of Medicine.

This multidisciplinary group is testing the boundaries of science with the design and engineering of a wireless, next-generation tissue implant that can be inserted deep into the brain with minimally invasive surgery.

The device is used in the study of neural activity and other biological process in free moving, awake mice.

Conventional methods had to rely on simple metal tubes and tethered optical fibers to deliver drugs and the light-emitting probe.

Typically, these systems were connected to an external source. One of the main drawbacks was that it restricted the animal's natural movement and greatly damaged neural tissue, altering experimental results.

In order to address these issues the optofluidic neuronal probe was manufactured with the assistance of an engineering team led by John A. Rogers Ph.D., and Jae-Woong Jeong Ph.D., from University of Illinois and University of Colorado respectively.

The new probe has no external connections and control of the system is done wirelessly, setting it apart from similar devices.

"We spent about 2 years working on this project and had about 30 various prototypes," said Dr. Bruchas.

The soft device is one-tenth the diameter (50 µm) of a standard pencil lead and is able to pass through the eye of a needle. It consists of four channels that allows introduction of drug-mixture and four light-emitting probes. This entire device is lightweight such that it can be mounted on the head of adult mice and rats. The device is battery powered via infrared wireless control.

Looking to the future Dr. Bruchas says "We are working towards new generations of these devices and hope that we can achieve in vivo photo-pharmacology (use of drugs that are light sensitive switches within a living organism) in freely moving mice for the first time. This would be a breakthrough because it would allow manipulations and discrete drug delivery into brain areas with spatial and temporal precision."

Photo-pharmacology would be a form of DBS where light from the probe would activate a drug that contains a light activated or deactivated group, therefore turning treatment on or off.

The multi-functionality and wireless capabilities of these thin fluid channels opens up the possibility for clinical application where the device could be applied for treatment of certain conditions in humans.

Application examples would be the management of various neurological and psychiatric conditions such as chronic pain, depression, addictive disorders, epilepsy and severe Parkinson's by means of DBS coupled with drug or gene therapy.

The advantage over conventional pharmaceutical treatment is that this new technique involves more targeted drug therapy.

These drugs are activated only at the site where their action is required thereby giving rise to fewer side effects.

Taking a step towards this reality, Dr. Bruchas says, "We are beginning discussions with Dr. Dirk Trauner at the University of Munich, who has recently made significant advances in photo-chemistry that we hope to integrate with our device".

Treating complicated conditions with targeted therapy in the future may be as easy as turning on the light switch!

W. A. Velema et al. Photopharmacology: Beyond Proof of Principle. Journal of the American Chemical Society, 2014